Showing posts from 2016
Show All

By Nimrod - October 02, 2016
Well, this is the first time that I have been demanded to write an article about something. So a new personal best for this rather boring blog. I recently gave the TOEFL and was pretty much shocked to see my scores. Here they are: Reading: 30/30 Listening: 30/30 Speaking: 24/30 Writing: 30/30 Total: 114/120 (^Dedicated to all the English teachers who criticized me until I was convinced I suck at English!) Without wasting much time, let's get to the point! First of all, let me make it clear that TOEFL is easy as well as difficult at the same time. The questions certainly won't make anyone sweat but there are other factors in these test that you need to tackle. Also, deciding a target score for TOEFL is very difficult despite the fact that TOEFL scores don't matter that much for selection process. Preparation: You're done with your GRE, prepare for TOEFL in a completely relaxed manner. No need to go savage here. Though don't extend the date beyond thre
25 comments
Read more

Hi,  I recently gave the GRE on 18th August. Call it a paradoxical chimera but I was able to score above my target score; at the same time I knew what question had gone wrong as soon as I left the exam center. I used to read a lot of articles about how people prepared for the exam and they did actually help me a lot with my planning. So to give back something in return, sharing my experience below! First, my score: 326 Quant: 167 Verbal: 159 AWA: 4.5 Mock test score at the beginning of preparation: 310. Scoring a 320 on the GRE is not really that difficult. Trust me! Why? I myself am an average student and cannot concentrate for long hours. However, the GRE is a lot different from all your other exams. With proper and gradual mastery of the required skills one can be the master of this domain. Without much dilly-dally, let's start! Pre-requisites: GRE tests the skills you have been using since 6th or 7th grade. This applies to the quant as well as verbal section. No
20 comments
Read more 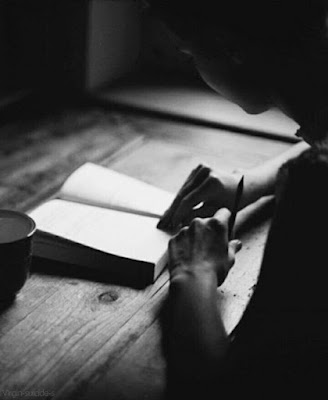 Dear Diary, I am trembling as I write to you....again... the emotions I feel, are so strong and indefinite.. I don't know if this is hatred or fear or anger...but I am all consumed. He came after me again.. I tried my best to avoid him … even ensured that I was far away from any place he visited... I thought he has forgotten about me … .but he came...that smug smile on his crooked face...which only meant trouble for me. When I last confronted Maa about what he did to me … . how he touched me... the disgust which lasted a month... she asked me to stay away from him and not react or tell anyone about what  he did.. She never asked me why did I not confide when it had happened ! Instead, "it is useless, " she said to me " Beta, it's a men's world, you'll be the one defamed even if we were to take an action..Doesn't matter if you are as influential as he is or you are merely a housemaid! Yeh sab sirf bolne ki baat h that everyone
Post a Comment
Read more

He quit that day. He had been a news reporter for the past thirteen years however the past few months had not been the best ones. The job he took so much pride in, had taken a toll on him. The kind of stuff that he had to report...the loss, the deaths! That day he just couldn't speak when the telecast started. On live television, he just got up and left the studio. Everything haunted him. He felt powerless because he could do nothing to improve the stuff he reported. After storming out of his office building, he went to a nearby café. He sat by the silent corner alone, contemplating what had been bothering him. 'This isn't what I signed up for.' Just the day before, he called someone "Faggy" for wearing a funny dress and all eyes rolled at him as if he were a villain. He was a news reporter by profession but at the end of the day, he was just like you and me. You would call him an asshole for using offensive and derogatory remarks far often but he mean
Post a Comment
Read more 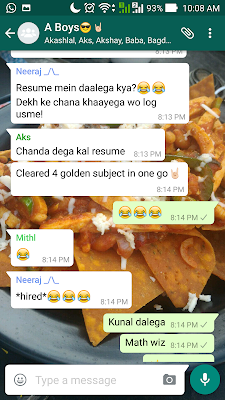 After writing fake resumes for some XYZ or ABC during school days, it was finally time to make a real legit one. As simple and straightforward as it sounds. DO NOT THINK IT IS A CAKEWALK! Making a resume requires herculean effort, mainly beacause you have to lie straight through your teeth. Why you ask? Well here's how resumes would look like if we were being totally honest! 1. On the resume: My objective is to make possible the impossible, no matter how arduous the job assigned be.     Real Meaning: 2. If you are applying for a job at Playboy, honesty would be good! 3. You could just say," I have several backlogs in mathematics because I love the subject so much, I just could not get enough of it." 4. Simply turn your weakness into your strength! 5.On the resume: Love adventures, adrenaline junkie.   Real meaning: Avoided drop like a boss! 6. You could write about the gang you founded only    if    {the company you are
2 comments
Read more

By Nimrod - January 31, 2016
It was almost half past 3 and Jake, with his headphones put on and some pdf opened up on the screen was busy writing for straight three hours now. Yes, this was again the season of submissions. The season which comes twice a year and becomes every student’s nightmare! The rest of the college was done with them and he felt as if he was the last scribbling. The one who begins the race when the winner is already announced! He already knew that no matter what he did with those assignments his grades for the semester were doomed. He had two more days to get done with his work and hope for grades better than just passing ones. Suddenly a notification popped up on his mobile screen. He scrolled down the notification panel and a message from someone in a group   read:   “Season 5 of Game of Thrones leaked !” He felt blood rush through his veins. The excitement he had for the upcoming episode and now he was blessed with the entire season. LIKE 10 DAMN EPISODES!!! He closed the notificatio
Post a Comment
Read more

As he stared into the mirror, he felt a stranger stare back at him. A stranger who looked just like him but his eyes were all judgmental. " I bet you think you're pretty clever, don't you boy?" Was the mirror really talking to him? Or was he hearing his own repressed voice ? Or maybe a song stuck in his head... and the mirror sang, "Flying on your motorcycle Watching all the ground beneath you drop Kill yourself for recognition Kill yourself to never ever stop You broke another mirror You're turning into something you are not." Accumulating all that was inside the vault, he closed his eyes pulled his arm back and punched the mirror with all his might. Neither did the glass crack nor did his fist hurt. He felt a power matching his which stopped his hand. There was no sense of brutality in the force’s action. Infact it was calm just like the morning breeze. He opened his eyes to see his hand halfway through the mirror held by the image he saw
Post a Comment
Read more
More posts