By Nimrod - January 03, 2016
As he stared into the mirror, he felt a stranger stare back at him. A stranger who looked just like him but his eyes were all judgmental. " I bet you think you're pretty clever, don't you boy?" Was the mirror really talking to him? Or was he hearing his own repressed voice ? Or maybe a song stuck in his head... and the mirror sang,
"Flying on your motorcycle
Watching all the ground beneath you drop
Kill yourself for recognition
Kill yourself to never ever stop
You broke another mirror
You're turning into something you are not."

Accumulating all that was inside the vault, he closed his eyes pulled his arm back and punched the mirror with all his might. Neither did the glass crack nor did his fist hurt. He felt a power matching his which stopped his hand. There was no sense of brutality in the force’s action. Infact it was calm just like the morning breeze. He opened his eyes to see his hand halfway through the mirror held by the image he saw on the other side. As he tried to pull back, the image pulled him in. "Who are you?", he asked, all confused. "I'm Yoda," replied the image and the words hung midair. "Hahaha, got you!" said the image," I'm the real you and hence, that terrible attempt at humour." "I am the one who you are. You- you are the version of yourself who has been tempered with and moulded. I am the one whom you have been chasing all your life. Your ultimate dream. The ideal version of yourself which you will always want to be, but no matter how much you chase, CATCH ME, YOU WON'T ! " And the image started running towards what seemed like a castle. 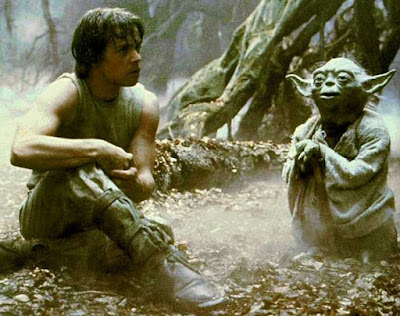 He didn't know what had hit him and what he was supposed to do. The only thing he could think of, was chasing that image. He started running behind the image as fast as his legs went. He saw the image run upstairs in a distance. Flight after flight, he ran as though he was the one being chased. He reached a floor full of doors. Behind each of those doors, he saw a mirror and in each mirror he saw someone he knew. Trying to catch his breath he tried to grasp all of what surrounded him and heard himself scream, “What is this?". At a distance his image came forward, "These are all the people you know; for me.. they are all living freely, but you have locked them in the mirror of your judgment. Unless you stop perceiving everything the way you want it to be, you will never be able to set yourself free. Sometimes, all you have to do is drown your beliefs to have someone else live in peace." Saying so, the image started running again... 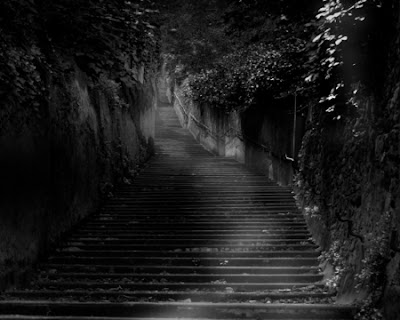 Chasing the image again, flight by flight, he saw sunlight beam into the dark surrounding and as he ran the light slowly eclipsed over the darkness and he passed through a door for what seemed like the rooftop. "Now what?" he cried dropping down on his knees gasping for air. His demeanor as languid as it never was before. "Look around," said the image. As he gazed around under the clear skies, he saw a vast ocean, competing with the sky which was crystal blue. In the distance he saw a small island. "All you want to be is not me, everything lies there, on that island. Now that you have freed every judgement you held, you can take whatever leap you want to reach that island for you shall not fear the consequences." 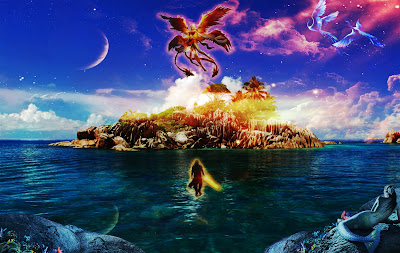 A helicopter came hovering on the rooftop. The image got on it and said,"I was supposed to leave in a bus. But since I am you, you're imagining me to leave off in what you think is cool and this is awesome! I shall leave you here, go take the leap. MAY THE FORCE BE WITH YOU!" So, he ran as fast as he could and at the edge..he plunged off the rooftop. As he kept going he thought wings would magically sprout from his back when the time was right. So he smiled and continued his downward flight. This wasn't the case to be. As he sensed the ground approaching he closed his eyes. THUD! SHATTER! SHATTER! As he slowly opened his eyes a cracked mirror stood in front of him. "Damn! my punches are getting better!" he exclaimed.

So, you made it through reading that shit! I admire your resilience.
Anyways, here's wishing all you folks a very happy new year! Hope 2016 turns out to be DA-BOMB xD.
Hope you liked this article. Feel free to review, criticize, share and do hit the +1 button. That is a much-needed help.
A special mention and thanks to my proofreader whose name requires permission I guess (and hasn't been granted XD)!

Until next time,
Au revoir!